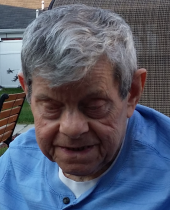 Alva Winters, age 79 of Owingsville, formerly of Lockport, died Thursday, February 5, 2015 at St. Joseph Hospital in Mt. Sterling. He was born in Lockport on June 13, 1935 and was the son of the late Dan and Cassie Chisholm Winters. He was a member of Gospel Kingdom Church in Louisville. Survivors include his wife: Garnetta Wise Winters of Owingsville; one daughter: Becky Kemplin (Tim) of Salt Lick; and several nieces and nephews. He was preceded in death by two brothers: James (Jimmy) Winters and Latha Winters; and four sisters: Daphne Mertz, Martha Adams, Ada Basel and Wilma Newell. Funeral services will be held 1:30 p.m. Saturday, February 7, 2015 at Sholar Funeral Home of Pleasureville. Brother Mike Aldridge will officiate. Burial will be in Wallace Cemetery. Visitation will be from 11:30 a.m. until time of service on Saturday, February 7, 2015. Pallbearers will be Guy W. Winters, Steve Spencer, Marty Shely, Gary Ball, Keith Allen Winters and Mike Aldridge. Online condolences may be expressed at sholarfuneralhome.com.

To order memorial trees or send flowers to the family in memory of Alva winters, please visit our flower store.