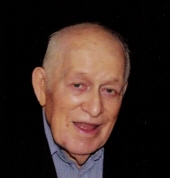 Alvin Lee Roberts, age 85 of Bethlehem, KY Alvin Lee Roberts, age 85 of Bethlehem, died Friday, September 13, 2013 at Homestead Nursing Center in New Castle. He was born in Bethlehem and was the son of the late Charlie and Valeda Arnold Roberts. Alvin was a graduate of Georgetown College, a veteran of the United States Air Force and taught Math at the Pleasureville High School for two years. He retired from International Harvester after 36 years of service. As a life-long member of Bethlehem Baptist Church, he served as Sunday School Director and R.A. Leader for many years. Alvin was one of the founders of the Live Nativity presented annually in Bethlehem, KY. He was a woodworker co-owning and operating Al Art and Ambers Crafts from 1979 to 2006. In addition to his parents, he is preceded in death by his wife, Ann Marie Byers Roberts. He is survived by six nieces, and several great-nieces and nephews, and several cousins. Services are scheduled for 11 a.m. Tuesday, September 17, 2013, at Sholar Funeral Home of Pleasureville. Rev. Travis Sheehan, pastor of Bethlehem Baptist Church will officiate. Burial will be in Pleasureville Cemetery. Visitation will be from 5 pm. until 8 p.m. Monday September 16, 2013. Memorial contributions may be made to Bethlehem Baptist Church, c/o Linda Roberts, 2727 Bethlehem Road, Pleasureville, KY 40057. Online condolences may be expressed at sholarfuneralhome.com.

To order memorial trees or send flowers to the family in memory of Alvin lee roberts, please visit our flower store.