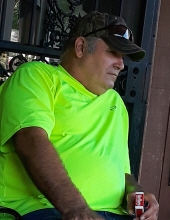 Arthur Thomas “Artie” Adams, age 57, of Pleasureville, died Saturday, July 28, 2018 at Baptist Health, Louisville. He was born May 25, 1961 in Frankfort and was a U.S. Army Veteran. He worked as a truck driver for Hutchens Trucking and attended Bethlehem United Methodist Church.

Funeral services are scheduled for 11 a.m. Thursday, August 2, 2018 at Sholar Funeral Home of Pleasureville with Rev. Jerry Anderson officiating. Visitation will be from 4 p.m. until 8 p.m. Wednesday, August 1, 2018 and from 10 a.m. until time of the services on Thursday. Cremation will follow funeral services.

Expressions of sympathy may be made in the form of contributions to Sholar Funeral Home to assist with funeral expenses.

To order memorial trees or send flowers to the family in memory of Arthur thomas adams, please visit our flower store.