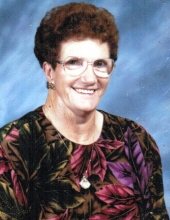 Barbara Jean Fisher Chadwell, age 85 of Eminence, died Saturday, November 30, 2019 at Baptist Health Hospital in LaGrange. She was born July 9, 1934 in Lockport to the late Alex Ferguson Fisher and Mary Daphne McAllister Fisher. She was a housewife, farmer, and previously worked at Brunswick Corporation in Eminence. She was a member of New Castle United Methodist Church.

Services will be held 1 p.m. Wednesday, December 4, 2019 at Sholar Funeral Home of Pleasureville. Rev. Garry Polston will officiate. Burial will be in Pleasureville Cemetery. Visitation will be from 4 p.m. until 8 p.m. Tuesday, December 3, 2019 and from 11 a.m. until time of services on Wednesday.

Expressions of sympathy may be made in the form of donations to the New Castle United Methodist Church, P.O. Box 194, New Castle, KY 40050, or Lockport Baptist Church, 128 Six Mile Road, Lockport, KY 40036.

To order memorial trees or send flowers to the family in memory of Barbara jean fisher chadwell, please visit our flower store.