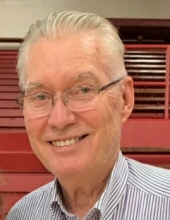 Clyde Jefferson Sholar, age 69 of Pleasureville, passed away on Saturday, May 28, 2022 at his residence. He was born at Trigg County Hospital in Cadiz, Kentucky on August 20, 1952 to Robert Jesse Sholar and Lula Pearl Lancaster Sholar. He was member of Pleasureville United Methodist Church and was a licensed funeral director and embalmer. He was co-owner of Sholar Funeral Home with his wife Brenda since 1990 and still owned and operated up until his death. Clyde was a member of the Kentucky National Guard from 1971 and transferred to the United States Army Reserve in 1980 and retired as a major in the United States Army. In 1980, he began a career with the Department of Interior, U. S. Geological Survey where he worked as a scientist-hydrologist and regional safety manager, retiring in 2012 with 32 years of service. Clyde enjoyed keeping a good a yard and gardening but the most joy he received was being a father to Jessi and grandfather to Sophie, Olivia and Dathan.

Graveside service will be held at 11 a.m., Wednesday, June 1, 2022 at the Pleasureville Cemetery, with full military honors. Rev. Jesse Landers and Mr. Joe Lancaster will officiate. Visitation will be Tuesday, May 31, 2022 from 3 p.m. until 7 p.m. at Sholar Funeral Home.

Members of the Pleasureville Fire Department will serve as pallbearers.

Expressions of sympathy may take the form of gifts to: Pleasureville United Methodist Church, P.O. Box 116, Pleasureville, KY 40057.
Online condolences can be made at sholarfuneralhome.com.

To order memorial trees or send flowers to the family in memory of Clyde jefferson sholar, please visit our flower store.