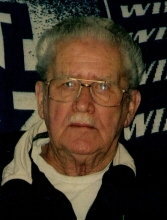 Donald Ray Spear, age 81 of Eminence Donald Ray Spear, age 81 of Eminence, died Thursday, January 31, 2013. He was born in Bethlehem, and was the son of John Paul Spear, Sr. and Fannie B. Shannon Spear. He farmed for much of his life and retired from American Standard after 30+ years, was a United States Army Veteran during the Korean War, was a member of the Local Order of Moose Lodge Shelbyville, KY #1715, and was a member of Bethlehem United Methodist Church. He is survived by his wife: Violet Beverly Spear of Eminence; three daughters: Terri Spear Vaughn (Dennis) of New Castle, Patty Spear Luttrell (Dan) of Frankfort, and Tish Spear Berry (Ed) of Eminence; two brothers: John Spear, Jr. of Louisville, and Gerald Spear of Lawrenceburg; two sisters: Betty Moody (John) and Joyce Spear, both of Eminence; six grandchildren, seven great-grandchildren, and several nieces and nephews. He was preceded in death by a brother, Charles Spear. Funeral services are scheduled for 1 p.m. Monday, February 4, 2013 at Sholar Funeral Home of Pleasureville with Rev. Dan Luttrell and Rev. Ed Berry officiating. Interment will be in Pleasureville Cemetery. Visitation will be from 5 p.m. until 8 p.m. Sunday, February 3, 2013 and from 11 a.m. until 1 p.m. Monday, February 4, 2013. Expressions of sympathy may be made to Bethlehem United Methodist Church. Online condolences

To order memorial trees or send flowers to the family in memory of Donald ray spear, please visit our flower store.