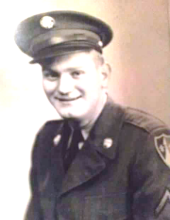 Earl William Walker, age 85 of Eminence, died Monday, February 19, 2018 at his residence. He was born September 27, 1932 in LaGrange, and was the son of the late William McKinley and Ocie Mae Walker. He worked in several meat packing plants in Louisville and retired from Hussey Copper in Eminence. He was a member of Union Baptist Church, and a U.S. Army Veteran of the Korean Conflict.

Services will be held at 11 a.m. Saturday, February 24, 2018 at Sholar Funeral Home of Pleasureville. Rev. Bob Litton, pastor of Union Baptist Church will officiate. Visitation is scheduled for 5 p.m. until 8 p.m. Friday, February 23, 2018, and from 10 a.m. until time of services on Saturday. Burial will be in Smithfield Cemetery with military honors.

To order memorial trees or send flowers to the family in memory of Earl william walker, please visit our flower store.