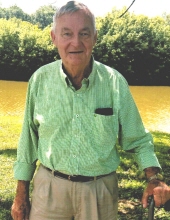 E.B. Shaw, age 84, of Pleasureville, died Friday, March 10, 2017, at the Masonic Home of Shelbyville. He was born April 25, 1932 in Cropper, and was the son of the late Linnie and Rose Lee Baldwin Shaw. He was a farmer and was retired from General Electric where he worked in the shipping and receiving department. He was a member of the Independent Order of Odd Fellow Lodge, and belonged to Cropper Baptist Church where he served as a deacon.

He was preceded in death by his wife: Mary Elizabeth Newman Shaw; and a brother, Donnie Lee Shaw.

Funeral services are scheduled for 1 p.m. Tuesday, March 14, 2017 at Sholar Funeral Home of Pleasureville. Rev. Jacky Newton, pastor of Franklinton Baptist Church, will officiate. . Visitation will be from 11 a.m. until 1 p.m. prior to the funeral on Tuesday. Burial will be in Pleasureville Cemetery.

To order memorial trees or send flowers to the family in memory of E.b. shaw, please visit our flower store.