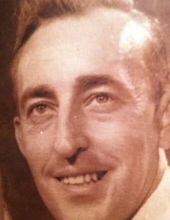 Elliott (Ed) Harrod Jennings, age 81, of Eminence, died Sunday, May 19, 2019 at his residence. He was born April 20, 1938 in Lockport and was the son of the late Eugene Jennings and Rosa Moore Jennings. He had worked as a mechanic and owned Jennings Mobile, in Eminence.

He was preceded in death by his son: Doug Raisor; and brother: Sam Jennings.

Memorial service will be held 3 p.m. Friday, May 24, 2019 at Daybreak Baptist Church in Eminence. Rev. Michael Fitzgerald will officiate. Visitation will be 1 p.m. until 3 p.m. the day of the services.

Expressions of sympathy may be made in the form of donations to Daybreak Baptist Church, Eminence.

To order memorial trees or send flowers to the family in memory of Elliott (ed) harrod jennings, please visit our flower store.