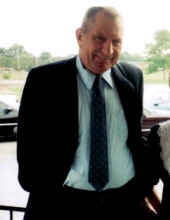 Emmett L. Woods, age 84 of Campbellsburg, died Sunday, January 7, 2018 at Baptist Health, LaGrange. He was born July, 26, 1933 in Franklin County, and was the son of the late Carl and Ivy White Woods. He was a tile layer and belonged to Providence Baptist Church in Campbellsburg. He was a United States Army Veteran, proudly serving during the Korean Conflict.

Funeral services are scheduled for 11 a.m. Wednesday, January 10, 2018, at Sholar Funeral Home of Pleasureville. Services will be officiated by Rev. Mike Huff, pastor of Providence Baptist Church. Visitation will be from 5 p.m. until 8 p.m. Tuesday, January 9, 2018, and from 10 a.m. until time of services on Wednesday. Burial will be in Pleasureville Cemetery.

To order memorial trees or send flowers to the family in memory of Emmett luther woods, please visit our flower store.