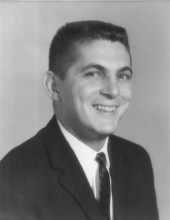 Fred was the Executive Director of the Kentucky Association of Counties (KACo) until his retirement, and was credited with starting programs that benefit many counties today. He began his career as Head Basketball Coach at North Middletown High School and later at Bourbon County High School, where he was named Mid-State Conference Coach of the Year for the 1964-65 season. Fred also worked for the Kentucky Department of Education, Hinkle Contracting Corporation, and the Kentucky Department of Commerce.

A memorial service will be held at 1 p.m. on Monday, June 18, 2018 at the Pleasant View United Methodist Church, 13735 Castle Highway Pleasureville, KY 40057. Visitation will be Monday from 10 a.m. until time of service at the church.

To order memorial trees or send flowers to the family in memory of Fred buren creasey, please visit our flower store.