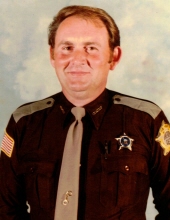 G.R. (Bobby) Downey, age 75 of Pleasureville died Friday, March 4, 2022. He was the son of the late Robert A. Downey and Catherine J. Gordon. He served the Henry County Sheriff’s Department for 25 years (1981 through 2006), the last eight years as Sheriff. In addition, he was a farmer and a mechanic.

He is survived by his wife of 58 years, Janice Downey; one son, Troy Lee Downey and his favorite daughter-in-law, Darcy of Louisville; one grandson, Jacob Miller of Louisville; one brother, Doug Downey of Tucson, Arizona; one sister, Dale Downey of Indianapolis; and one “special cousin”, Glenn Smith of Pleasureville.

He was preceded in death by one brother, Gary Downey and one sister, Jane Rundle.

Funeral services will be held 11 a.m. Wednesday, March 9, 2022 at Sholar Funeral Home of Pleasureville. Bro. Larry Rhodes will officiate and County Judge Executive John Logan Brent will be speaking. Music will be provided by Jamie Tingle. Burial will be in Pleasureville Cemetery. Visitation will be Tuesday, March 8, 2022 from 4 p.m. until 7 p.m. and 10 a.m. until time of the service on Wednesday.

Expressions of sympathy may take the form of contributions to the Grub Ridge Church c/o Limestone Bank of Pleasureville.

To order memorial trees or send flowers to the family in memory of G. r. (bobby) downey, please visit our flower store.