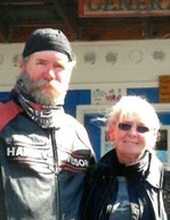 Gus Jerry Ettinger, age 63, of Frankfort, died Friday, October 6, 2017. He was born in Indianapolis, Indiana on October 2, 1954, and was the son of the late Harry and Sarah Hammond Ettinger. He was foreman at Townsend Tree Service, had a passion for motorcycles, and was of a member of the Kentucky Roadrunners.

He is survived by his daughter: Sarah Ettinger of Louisville; and his sister: Charlene Quire (Jesse) of Eminence. He is preceded in death by his son: Gus Dillon Ettinger; and his brother: Bill Moore.

A celebration of life will be shared with Betty Sue Richardson Rice, at 5 p.m. Saturday, October 21, 2017 at the family farm at 5855 Harp Pike, Frankfort, Kentucky, with Joe Clark speaking. Following, a gathering of family and friends will be held at the farm to share stories and memories.

Expressions of sympathy may be made in the form of contributions to the Franklin County Humane Society.

To order memorial trees or send flowers to the family in memory of Gus jerry ettinger, please visit our flower store.