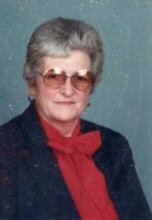 Helen Josephine Shaw Bond, age 87 of Pleasureville, died Tuesday, December 23, 2014 at Jewish Hospital in Louisville. She was the daughter of the late Owen A. and Lizzie Kate Demaree Shaw. She was a homemaker and a member of Pleasureville Baptist Church. She is survived by three sons: Owen E. Bond (Sue) of Cropper, Jerry L. Bond (Kathleen) of Pleasureville and Lawrence W. Bond (Kristy) of Eminence; one daughter: Mary Jo Brown (Burns) of Bethlehem; ten grandchildren, six great-grandchildren, and several nieces and nephews. She is preceded in death by her husband, Rudolph Bond. Funeral services are scheduled for 10:30 a.m. Saturday, December 27, 2014 at Sholar Funeral Home of Pleasureville with Rev. Jerry Anderson, pastor of Pleasureville Baptist Church officiating. Interment will be in Grove Hill Cemetery in Shelbyville. Visitation will be 5 - 8 p.m. Friday, December 26, 2014 at the funeral home and from 9 a.m. until time of the funeral on Saturday. Pallbearers include Brian Bond, Adriane Meyers, Marc Bond, Alan Bond, Brent Bond, Clarence Dean Tingle, Winter Brown and Samantha Allison. Expression of sympathy may be made in the form of contributions to Pleasureville Baptist Church Women on Missions, 2749 Hillspring Road, P. O. BOX 147, Pleasureville, KY 40047. Online condolences may be expressed at sholarfuneralhome.com.

To order memorial trees or send flowers to the family in memory of Helen bond, please visit our flower store.