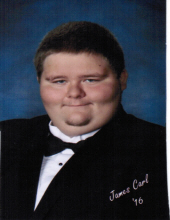 James Carl Patrick Jamison, age 18, of Pleasureville, died Tuesday, November 15, 2016 at his residence. He was born December 13, 1997 in Louisville. He was a Retail Sales Associate, a member of Crossroads Lighthouse Church in Eminence, and a 2016 graduate of Shelby County High School.

Funeral services are scheduled for 1 p.m. Saturday, November 19, 2016 at Crossroads Lighthouse Church with Rev. Paul Harvey officiating. Burial will be in Bagdad Cemetery. Visitation will be from 4 p.m. until 8 p.m. Friday, November 18, 2016 at the church, and from 11 a.m. until time of service on Saturday at the church. Sholar Funeral Home of Pleasureville is in charge of arrangements.

To order memorial trees or send flowers to the family in memory of James carl patrick jamison, please visit our flower store.