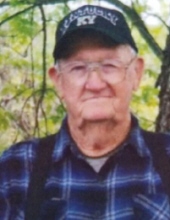 Julius D Willhoite, age 84, of Pleasureville, died Monday, April 25, 2016. He was born January 30, 1932 and was the son of the late Les and Bertha Ivers Willhoite. He was a farmer and cedar logger, and a veteran of the United States Marine Corps.

He is survived by one son: Ryan Hansen (Melissa) of Pleasureville; two daughters: Julie Acree (Jack) of LaGrange and Tina Lucas (Mike) of Pleasureville; one sister: Lillian Walls of California; two grandchildren: Leslie Hollon (Alex) and Charlie Lucas; and two great-grandchildren: Lizzy Hansen and Liam Hansen. He was preceded in death by his loving wife Elizabeth "Punkin" Kephart Willhoite.

Funeral services are scheduled for 2 p.m. Friday, April 29, 2016 at Sholar Funeral Home of Pleasureville with Bonnie Ethington officiating. Burial will be in Defoe Cemetery. Visitation will be from 5 p.m. until 8 p.m. Thursday, April 28, 2016 and from 10 a.m. until time of the service on Friday.

To order memorial trees or send flowers to the family in memory of Julius d willhoite, please visit our flower store.