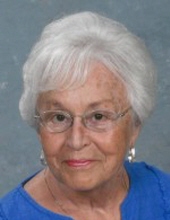 Joanna Stivers Cleveland, age 88, of Winchester, Virginia, passed away on Saturday, February 27, 2016 at her residence.

Mrs. Cleveland was born in 1927 in Henry County, Kentucky. She was a graduate of Pleasureville High School and attended Ward-Belmont College in Nashville, Tennessee. She was a loving wife, mother, sister, grandmother, and great-grandmother.

She married Robert Newton Cleveland on September 5, 1948, in Kentucky.

In addition to her husband of sixty-nine years, she is survived by her daughter, Rosie Schiavone and her husband, Daniel, of Winchester, Virginia; her sister, Nora Elizabeth McCarty of Frankfort, Kentucky; her brother: Roger Stivers of South Padre Island, Texas; eight grandchildren and ten great-grandchildren. She was preceded in death by her son, Robert N. Cleveland, Jr.

Graveside services are scheduled for 11 a.m. Saturday, June 4, 2016 at the Pleasureville Dutch Cemetery in Henry County, Kentucky. Rev. Carl Rucker will officiate. Arrangements by Sholar Funeral Home of Pleasureville. Memorial contributions may be made in Joanna’s memory to a charity of the donor’s choice. Online condolences may be expressed at sholarfuneralhome.com.

To order memorial trees or send flowers to the family in memory of Joanna stivers cleveland, please visit our flower store.