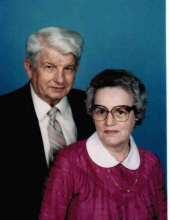 Katherine Marie Winters Woods, age 94, of Pleasureville, died Friday, December 14, 2018, at New Castle Nursing and Rehabilitation Center. She was born October 8, 1924, in Lockport, and was the daughter of the late Robert and Sallie Sutherland Winters. She was an Avon Representative and a homemaker. She was a member of Pleasureville Baptist Church.

She is survived by two sons: Jimmy Woods (Joyce) of Smithfield, and David Woods (Anna) of Eminence; six grandchildren, nine great-grandchildren, and several nieces and nephews.

She was preceded in death by her husband: James E. Woods; two brothers: Vernie B. Winters and Robert G. Winters; and two sisters: Nellie Matthews and Wava Lee Winters.

To order memorial trees or send flowers to the family in memory of Katherine marie winters woods, please visit our flower store.