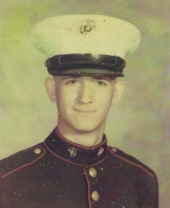 Larry Brent Chisholm, age 62 of Pleasureville Larry Brent Chisholm, age 62 of Pleasureville, died Wednesday, August 8, 2012 at University of Louisville Hospital in Louisville. He was a United States Marine Corps veteran, having served two tours in Vietnam. He is survived by his wife: Ann Bennett Chisholm of Pleasureville; his mother: Carolyn Chisholm Harilson of Frankfort; one step-daughter: Chrystal Haberman of Franklinton; one brother: Greg Chisholm of Frankfort, and two grandchildren: Beth Ann Haberman and Devon Haberman. He was preceded in death by his father, Carroll Chisholm. Services are scheduled for 2 p.m. Monday, August 13, 2012 at Sholar Funeral Home of Pleasureville. Visitation will be after 10 a.m. Monday. Burial will be in Defoe Cemetery. Expressions of sympathy may be made to the Disabled American Veterans, Attention: GIFT PROCESSING, P.O. Box 14301, Cincinnati, OH 45250-0301. Online condolences may be expressed at sholarfuneralhome.com

To order memorial trees or send flowers to the family in memory of Larry brent chisholm, please visit our flower store.