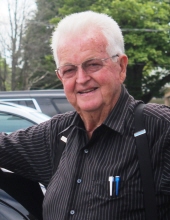 Marlyn S. Browning, age 79, of Pleasureville passed away Tuesday, September 5, 2017. He graduated from Pleasureville High School in 1956 and it was there he met his loving wife of over 60 years, Wanda Smith Browning, whom he affectionately referred to as his “Wandi Gal”. Marlyn was the owner of Browning Chevrolet in Eminence, KY where he has served his community and his customers for over 60 years.

He was a long time, faithful member of the Pleasureville Baptist Church where he served as a deacon and a dedicated member of the church choir. He enjoyed singing gospel music, (both publicly, and in his vehicle), golfing, and his favorite sport, bowling. Marlyn was an avid bowler and a proud supporter of the sport. He made many wonderful contributions to the sport including sponsoring many men’s, women’s, and youth bowling leagues, tournaments, and various events. In 1991, he was inducted into the Greater Louisville Bowing Association Hall of Fame and in 1994, he was inducted into the Southern Bowling Congress Hall of Fame.

As a young man, he operated a service station and garage below his parent’s home in Pleasureville. From there, he opened a Sinclair gas/service station and used car lot in the early 1950's in Eminence. After several years, he purchased the Pontiac dealership and the Dewey Johnson building in the early 1970's and became a "new car" dealer. A few years later, he added Chevrolet and moved to the Land building (where Browning Chevrolet is today in Eminence, KY). Over those years, he has sold thousands of vehicles and made many wonderful friends! Many people have often shared their stories of how he sold them their very first car or how they have been trading vehicles with him since the beginning. Others have said that they are the 4th generation in their family that has traded with Browning's and many have just recently made their first trip to Eminence and to Browning Chevrolet. Marlyn loved his customers and treasured the lifelong friendships that had resulted from a life well lived. He left a beautiful legacy for his family and all that knew him. Each of his life’s accomplishments reflected his character and was representative of a generation full of great men and women who had an impeccable work ethic and dedication to faith and family.

To order memorial trees or send flowers to the family in memory of Marlyn browning, please visit our flower store.