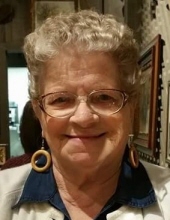 Marsha Dale Roberts, age 70, of Eminence, died Monday, June 27, 2016, at Norton Brownsboro Hospital in Louisville. She was born August 19, 1945 in Frankfort, and was the daughter of the late Morris and Leatrice Stroker Wease. She had worked in the retail industry at Walmart.

She is survived by one son: Michael Roberts (Melissa) of Eminence; two daughters: Toni Sharp of Bedford and Lynn Ann Crenshaw of Shelbyville; six grandchildren and five great-grandchildren. She was preceded in death by her husband, Freddie E. Roberts and a sister, Diana Watts.

Memorial contributions may be given towards funeral expenses.

To order memorial trees or send flowers to the family in memory of Marsha dale roberts, please visit our flower store.