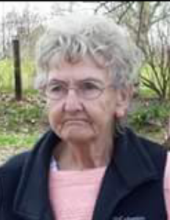 Mary Katherine Smither Moore, age 77 of Lockport, died Sunday, November 6, 2016 at her residence surrounded by her family. She was born February 15, 1939 in Monterey, and was the daughter of the late Andrew and Katherine Thornton Smither. She was a homemaker and farmer, and a member of Lockport Baptist Church.

In addition to her parents, she was preceded in death by three brothers: Owen Smither, Donald Smither, and Ira Smither; a sister: Phyllis Ann Smither; and father-in law and mother-in law: Charlie Moore and Margaret Moore.

Funeral services are scheduled for 1 p.m. Wednesday, November 9, 2016, at Sholar Funeral Home of Pleasureville. Services will be officiated by Rev. Paul Briscoe, pastor of Lockport Baptist Church. Visitation will be from 4 p.m. until 8 p.m. Tuesday, November 8, 2016, and from 11 a.m. until time of services on Wednesday. Burial will be in Wallace Cemetery in Lockport.

Expressions of sympathy may be made in the form of contributions to Lockport Baptist Church, 4031 Harpers Ferry Road, Pleasureville, KY 40057.

To order memorial trees or send flowers to the family in memory of Mary katherine moore, please visit our flower store.