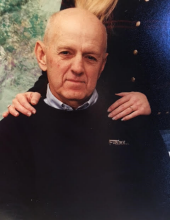 Melvin Lyons , 82, a lifelong resident of Bethlehem, KY passed away at his home on January 7, 2018. He was the son of the late Ruby Lyons and Emma Hawkins Lyons. He was preceded in death by six brothers and a sister.

He was an Army veteran, retired farmer, former owner of Kentuckiana Tobacco Warehouse in Carrollton, KY, and a Director of CUB Bank, Owenton.

To order memorial trees or send flowers to the family in memory of Melvin lyons, please visit our flower store.