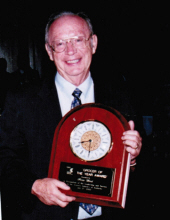 Norman (Norm) Thomas Wood, age 85 of Eminence, died Wednesday, October 12, 2016 at the Norton Brownsboro Hospital in Louisville. He was born December 8, 1930 in Upton, and was the son of the late Albert Stanley Wood and Olian Bandy Wood. He owned and operated Norm’s Food World Grocery in Eminence for several years and was a member of Henry Christian Church. He was a veteran of the U.S. Army and served in Korea.

Funeral services are scheduled for 2 p.m. Tuesday, October 18, 2016 at Henry Christian Church. Burial will be in Franklinton Cemetery. Visitation will be from 4 p.m. until 8:30 pm on Monday, October 17, 2016 and from noon until time of the service on Tuesday. Arrangements by Sholar Funeral Home of Pleasureville.

Expressions of sympathy may be made in the form of contributions to Eminence Fire and Rescue, 51 Depot Avenue, Eminence, KY 40019.

To order memorial trees or send flowers to the family in memory of Norman (norm) thomas wood, please visit our flower store.