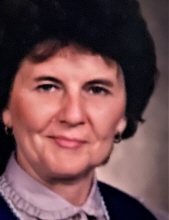 On October 5, 1936 at the homeplace near Cropper KY, Patricia Ann Belwood was born to Bob and Kathryn (Ethington) Belwood. Patsy, as most called her, was a big sister to Maurice Lee (M.L.), Carolyn and Bobbye Dean.

In 1955 she married Tommy Brown. They had their first child, Diana Dell, in 1957 while stationed in Germany. James Burns, their son, came along in 1960 and Patty Lee in 1961 completing their family.

Patsy first took on the role of mother in law in 1974 when Diana married Tom Eldridge. Later they welcomed Mary Jo into the family when she married Burns in 1980. Fred joined the family in 1992 when he married Patty, completing the “outlaws”.

One of her greatest titles was Grandmother. Melissa (Tim), Jennifer (T.J,), Micah (Lizzie), Brittany, Winter and Annalee were her pride and joy. She loved holidays with everyone at her house, cooking for the family and making the kids wait to open presents until the dishes were finished.

She attended Georgetown College and held different jobs such as former educator, clerk at Deposit Bank of Pleasureville, clerk at M. Fine & Sons and then retiring from the Commonwealth of Kentucky in 2000.

Patsy was an avid UK basketball fan, loved to read, play cards (she was quite competitive) and paint. She was an amazing artist. She was a member of Elmburg Baptist Church for over 75 years where she taught Sunday School, served as treasurer of Women on Mission and was involved in many activities of the church.

She was a member of the Cropper Ruritan Club where she served as vice president and had perfect attendance for 17 years. Bluegrass District awarded her with Ruritan of the Year in 2006 and received Citizenship & Patriotism Award in 2015 from the Club.
She will certainly be missed.

Open visitation will be observed from noon to 2:00 pm on Monday December 21, 2020 at Sholar Funeral Home. Due to recent restrictions, a family only service will be held at 2:00 pm followed by burial at Pleasureville Cemetery.

Food can be delivered to her house. If you bring it to the funeral home, please leave it in the containers and put in the refrigerator.

To order memorial trees or send flowers to the family in memory of Patricia (patsy) ann belwood brown, please visit our flower store.