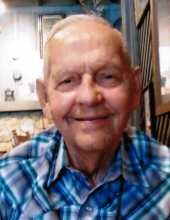 Left to honor him are one son, Gary McGowan, his beloved daughter-in-law and caretaker, Edith McGowan both from Shelbyville, one brother Don McGowan from Pleasureville, one Sister, Marilyn “Mickey” Sewell from New Castle, two grandsons, Gary McGowan, Jr. and his fiancé, Candice Wolfe of Shelbyville, and Paul McGowan of Louisville, three great grandchildren, Kali Bowie, Jaxon McGowan, and Taylor McGowan, several nieces and nephews, as well as his best friend, Lyle Sharp of Simpsonville who was more of a brother than a friend and who was always beside him through it all.

In his earlier years Paul was very active in the Loyal Order of the Moose-Shelbyville and remained a lifetime member until his death. Paul was an avid race car fan as well as a die-hard UK Wildcat fan. When his last wife “Toni” was still living they both loved to travel when their health allowed it. Additionally Paul retired from Roll Forming after 32 years.

Funeral arrangements are entrusted to Sholar Funeral Home in Pleasureville Ky. Visitation will be Wednesday, June 5, 2019 from 5 p.m. until 8 p.m., and on Thursday June 6, 2019 from 11 a.m. until 1 p.m. with the services being held at 1 p.m. Thursday with Bro. Steve Boyd officiating. Burial will be in Grove Hill Cemetery.

In lieu of flowers, monetary gifts can be sent to Simpsonville Baptist Church’s Building Fund.

To order memorial trees or send flowers to the family in memory of Paul mason mcgowan, please visit our flower store.