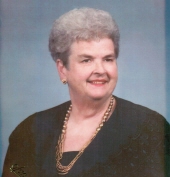 Reba Eldora Browning Harrod, age 79 of Pleasureville, died Monday, October 5, 2015, at Baptist Health in Louisville. She was born in Gest in Henry County on January 18, 1936, and was the daughter of the late Durward Lee Browning, Sr. and Viola Hester Hamilton Browning. She worked as a Registered Nurse, and was a member of Pleasureville Baptist Church. She is survived by her husband of fifty-eight years: Victor D. Harrod of Pleasureville; one son: Doug Harrod (Leslie) of Pleasureville; one daughter: Debbie Owens of New Albany, Indiana; one brother: Marlyn Browning (Wanda) of Pleasureville; one sister: Geraldine Jennings (Tommy) of Eminence; one grandchild: Austin Douglas Harrod; and several nieces and nephews. She was preceded in death by two brothers: Larry Browning and D.L. Browning; one sister: Corline Schnitzen; and two nephews: Brandon Earl Browning and Timothy Scott Jennings. Funeral services are scheduled for 11 a.m. Friday, October 9, 2015 at Sholar Funeral Home of Pleasureville with Rev. Jerry Anderson, pastor of Pleasureville Baptist Church, officiating. Visitation will be from 4 p.m. until 8 p.m. Thursday, October 8, 2015, and 10 a.m. until time of the service on Friday. Interment will be in Pleasureville Cemetery. Honorary pallbearers are Jeff Browning and Ray Jennings. Active pallbearers are Austin Harrod, Patrick Stucker, Chris Stucker, Brian Bond, Justin Browning, and Lue Lancaster. The family wishes to thank the Staff at Providence of New Castle for their care and kindness during her stay at Providence. Expressions of sympathy may be made to Hosparus Louisville, 3532 Ephraim McDowell Drive, Louisville, KY 40205. Online condolences may be expressed at sholarfuneralhome.com.

To order memorial trees or send flowers to the family in memory of Reba eldora browning harrod, please visit our flower store.