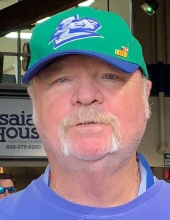 Terry Wayne McAlister, age 72 of Pleasureville, passed away on Thursday, December 2, 2021 at his residence. He was born in Lockport, to the late Henry Gayle McAlister and Ruby Wainscott McAlister on March 17. 1949. He worked as a radio disc jockey and was Vice President at Millstone Farms Sausage Company. He was a United States Air Force Veteran, having served three tours in Vietnam.

He was preceded in death by one brother, James McAlister.

Funeral services will be held 11 a.m., Tuesday, December 7, 2021 at Sholar Funeral Home of Pleasureville. Rev. Nathan Shaw will officiate. Burial will be at Pleasureville Cemetery. Visitation will be Monday, December 6, 2021 from 4 p.m. until 7 p.m. and 10 a.m. until time of the service on Tuesday.

Donations to assist with expenses may be made to Sholar Funeral Home, 5710 Castle Highway, Pleasureville, KY 40057.

To order memorial trees or send flowers to the family in memory of Terry wayne mcalister, please visit our flower store.